The Ministry of Agriculture and Livestock (MAG) distributed tuna from the Supertuna, Lucky Tuna and Tritún brands, packaged by the Mexican company B-Eminent, which was classified as a shell company by the tax authority of that country for billing simulated operations. The three brands of tuna were included in the food kits distributed by the Government of El Salvador, through MAG, as part of the Sanitary Emergency Program for the coronavirus pandemic.

Factum had access to official documentation in Mexico that reveals that the company was unable to dispel the treasury’s observations. The Tax Administration Secretariat (SAT) maintained that B-Eminent is a shell company because its infrastructure, its assets, its personnel and its ability to provide services do not correspond to the invoices it issues.

The first food packages distributed by the Government of El Salvador, in mid-May, included cans of tuna that bore the name and address in Baja California of the questioned company. But the packaging changed. In the following packages, the Ministry of Agriculture removed the name of the Mexican company from the can and only kept the legend “made in Mexico” and put the government logo next to the address and telephone number of that ministry in El Salvador.

Agriculture has not wanted to publish, disclose or account for its purchases during the pandemic. The only thing that is known is that it holds the second place among the ministries that received the most transfers from the emergency fund destined to attend to those affected by the coronavirus: 79.8 million dollars, mainly for the purchase and packaging of food.

The tuna for the kits was purchased when the Legislative Assembly allowed the Government to purchase products bypassing the Acquisitions and Contracts Law of the Public Administration -LACAP-, a license that the Executive had between March and May 2020. The deputies forced the ministries to send reports of their purchases, but Agriculture was the only one that failed to do so. The Minister of Agriculture, Pablo Anliker, also did not want to go to the Finance Commission. He has already stood up the deputies who are demanding accountability for the use of funds during the pandemic.

B-Eminent’s bad reputation doesn’t end with a tax problem. It is also one of the companies involved in the cartel of companies that swindled Venezuelans in 2017 by exporting food of very poor nutritional quality. B- Eminent dispatched food to Venezuela with surcharges, as evidenced by investigations by Armando.Info from Venezuela and Excelsior from Mexico.

In 2018, the Mexican government also accused B-Eminent of selling at a premium through intermediaries such as ShinningCapital. The Financial Investigation Unit of Mexico included it among the companies sanctioned for participating in the network of companies that sold low-quality products through a triangulation with intermediaries from the Nicolás Maduro government.

The tuna business is not the only one that unites Mexico, El Salvador and Venezuela. The Government’s food kits, in addition to tuna, also contain other products packaged in Mexico, such as Natalia chicken distributed by a Mexican company based in Sinaloa; or Campestre milk made by ILAS México, another of the companies questioned for corruption in Venezuela.

ILAS was one of the providers for the local supply and production committees (CLAP), the Nicolás Maduro regime’s flagship food assistance program, which subsidized food in the worst years of scarcity. The CLAP packages became, in turn, political control tools for the Venezuelan government, which used the program as a tool to win adherents and political sympathies. ILAS has been in the sights of the Mexican authorities since 2018 on suspicions of money laundering. 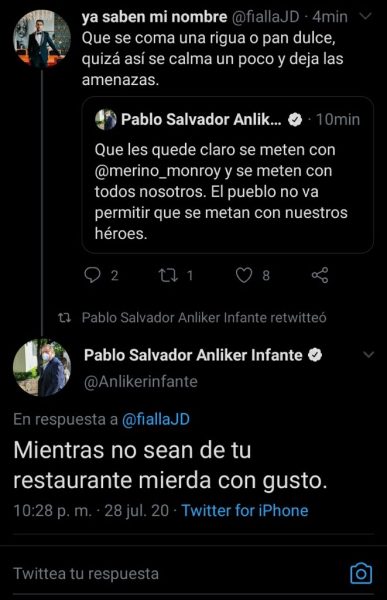 He is the first cousin of CEPA President Federico Anliker, a childhood friend of Nayib Bukele.

Besides being the representative of NUEVAS IDEAS for the department of La Libertad, he has been the legal representative of the company Precocidos S.A de C.V. that marketed rice and beans of the ALBA brand, part of the conglomerate financed by Alba Petróleos El Salvador.

Alba Petróleos is a large conglomerate of companies linked to the FMLN and under the control of the left-wing leader José Luis Merino, and the Prosecutor’s Office is investigating it for money laundering. On Friday, May 31, the FGR raided 25 companies related to Alba. El Faro revealed in 2016 that Alba companies transferred $290.6 million to companies located in Panama, a tax haven. In El Salvador, Alba invested in companies dedicated to the sale of gasoline, construction companies and in the TVX channel, of which Federico Anliker was vice president.