We’ve been away for a while. Most of our efforts in the past months were dedicated to organizing, executing and evaluating the 2019 Popular Education Workshop, a week-long experience in Cinquera. As we did last year, we chose to ask the participants to share their personal experience. This time, we present you Bill Silvia’s account of the events.

When you think of a great summer vacation, you probably think of alternating between being in a classroom, performing hard labor, and getting lots of homework. Or if not, you might want to look at it from a different perspective.

Earlier this month, a dozen students from around the world, five facilitators, and a host of community members met in Cinquera in the department of Cabañas to learn about Popular Education. In the process, we made friends and memories that will last a lifetime. We learned about tragic histories and inspiring growth. Most importantly (at least for the purposes of the trip), we learned about how the people came together and how to work toward similar growth in our own communities.

What is Popular Education?

Popular Education has many facets, and for this reason, many find it difficult to describe. As one might gather from the name, Popular Education emphasizes mutual education, eschewing the hierarchy of a singular teacher and numerous students for a recognition that all participants in the learning process have something to share and something to learn. It is also for the people: the goal of popular education is to lift up those who have previously been trampled on by society.

That’s nice, but what does it mean?

Popular Education involves sharing knowledge between people, building truths from that shared knowledge, and using that to make positive changes. It means allowing the experience of multiple people to fill in the gaps rather than assumptions made from afar. Because assumptions and observations made from afar are usually made from above – from those higher in power, socioeconomic class, and resources – this process is innately related to a breaking down of such barriers and promoting more equitable arrangements.

I found out about US-El Salvador Sister Cities from my sociology professor. As a nontraditional student interested in culture, identity, and power dynamics, the opportunity to learn more about a country that we had covered in several social science classes intrigued me. Like everybody else, I had heard the horror stories about the violence advisories associated with El Salvador; unlike most people, however, I had the assurances of someone who had been to and studied the country that I would not be in danger.

As a tutor and possibly future professor, I was also interested in learning more about Popular Education. The links between Popular Education and community organizing also stood out to me as a student involved in the Gender & Sexuality Alliance and UndocuAlly Task Force. 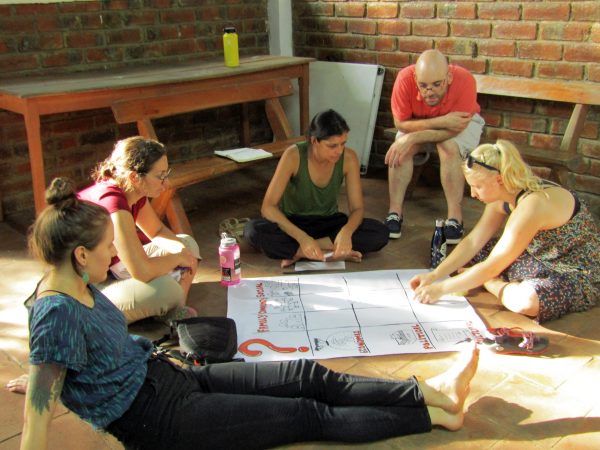 While this was not my first time traveling outside the United States, it was my first time traveling outside of the United States and Europe. As such, the experience was both more American and less American than I expected. More American because Salvadorans have a very different relationship with coffee than southern Europeans, and one that immediately made me – a severe coffee addict – feel at home. Less because everywhere I went I was confronted with the fact that the Salvadoran people were in an ongoing struggle to make their country more like the Democracy that they are on paper.

Most of the people I spoke with were fairly familiar with Americans, with the largest cultural adjustment being the lack of a steady supply of cheap meat three times a day. I learned to appreciate beans more than I had ever needed to back home! The food, while simple, was still a great experience and gave us a taste of Salvadoran traditions and staples, such as pupusas (Salvadoran thick tortillas stuffed with various fillings such as cheese, beans, vegetables, or meat). Despite the rampant deforestation we were shown and warned of, we also experienced a beautiful forest and an ecosystem teeming with life. 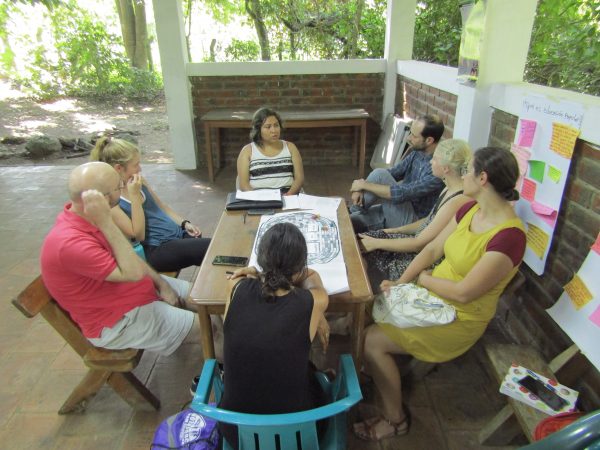 Because of the nature of Popular Education School, everybody who went on the trip was active in their community in a variety of different ways. More than one of my peers commented how inspiring it was to meet different people “fighting the good fight” in different ways and places. Our eagerness to learn from one another blurred our “work time” and our “free time” as we learned about distinct challenges faced by one another’s home cities and what we were doing to combat them.

In the classroom, we learned about the theory and practice of Popular Education, including writings by Paulo Freire. This was tough going at first – it’s a difficult topic to define and one that requires a lot of work to properly communicate. Over time, we each began to develop our own relationship with Popular Education.

In addition to practicing the tools of Popular Education in the classroom, we did so in the field as well. This meant visiting communities, experiencing their lives, and hearing their stories. We learned about the El Salvador Civil War from multiple angles, including why it was fought, how some residents survived the destruction of their communities, and how the repopulated communities grew from the ashes. We met farmers whose fields prospered because of local organization ARDM and discussed the differences a micro-loan program for women’s household and business expenses made for individuals and the community as a whole.

My greatest personal concern going into the Popular Education School was that I would learn a lot about the theory behind the model, but get back home and have no idea how to implement what I had learned. This is why I was overjoyed to find that the last day of class was focused on just that.

After a crash course in common Popular Education tools that hadn’t yet been covered (there’s too much to cover in one week, after all), students worked in groups to mix and match these tools (and make their own) to create educational programs based on the tenets of Popular Education. This experience really opened my eyes as to how Popular Education could be used by anybody: While the programs, cobbled together in under half an hour, were unrefined, all of them provided a sturdy foundation for something that could be used in a wider setting such as a university or community center.

After experiencing creating our own program, students were given the opportunity to buy further material published by Equipo Maiz to enhance the lessons of the week. I’ve already made plans to go over the tools present in these materials with student leaders at my home university.

CRIPDES’ representatives during this week-long training were Zulma Hernández (CRIPDES SUR) and Felicia Mijango (UCRES). They were also recently elected to be part of the new CRIPDES board. Sister Cities is extremely grateful for their support on this effort.