The defense of our environment and natural resources is a common struggle of people in the United States and our Salvadoran sisters and brothers. We have and we still accompany struggles for clean water, protection from transnational mining companies, and agricultural practices that prioritize healthy people over healthy profits, among others. We believe it is essential to join forces and learn from the challenges and successes of each other.

Sister Cities has acknowledged the importance of discussing the effects of climate change in the lives of people in the US but especially in the lives of those in most vulnerable conditions in El Salvador.

All of our delegations include conversations regarding lack of water, droughts, wildfires or displacement due to lack of food security.

If you are interested in joining the calls of our working group, supporting CRIPDES communities or if you would like resources to raise awareness about this issue in your area, contact us. We are eager to create new connections. 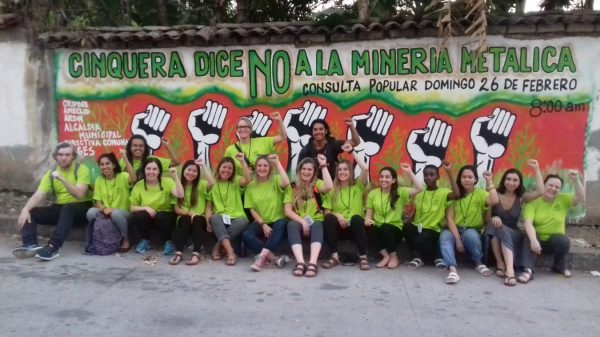 Some of CRIPDES environmental struggles that we have supported are the following:

The fight against Metalic Mining

The anti-mining campaign has been one of the greatest victories of the organizing we support and are a part of. A Canadian mining company began efforts to initiate mining in the northern department of Chalatenango in 2005 after significant reserves of gold were discovered. The company wasn’t anticipating the swift response of the organized people of Chalatenango, led by CRIPDES and accompanied by their U.S. sistered cities.

The people were steadfast in declaring “No to Mining,” and through over a decade of community outreach and education, political pressure, and strategic international campaigns, succeeded in defeating the company in an international trade court, and ultimately passing a law  prohibiting mining in El Salvador definitively. US-El Salvador Sister Cities participated in demonstrations in North America, publicity campaigns, and several delegations to bring international attention to the issue in El Salvador.

At the same time, many of our U.S. committees, such as groups in Wisconsin and Maine, were facing threats from mining companies in their own territory. The connections drawn between the struggles in both countries provided moral support and inspiration for all involved, and proved strategic in pressuring to defend natural resources.

The Bittersweet Story of the Sugarcane industry

Since the early 2000s El Salvador has experienced a massive growth in sugarcane production, most of which is exported for consumption or to be turned into ethanol. CRIPDES noticed that in communities surrounded by sugarcane production the incidence of kidney disease and other strange symptoms was increasing.

In the hot lowlands where sugar cane thrives, it is not uncommon for young men who work in the fields to die of renal failure before age 40, for the fruit trees families depend on to shrivel up, for children to suffer skin and respiratory diseases, and for drinking water to be contaminated by a myriad of toxic chemicals. Transnational companies like the famous Monsanto have established a monopoly on the sugar chain of production, effectively forcing the use of toxic chemicals, many of which are outlawed in the United States because of their known health impacts.

CRIPDES is working with other groups such as MOPAO (the People’s Organic Agriculture Movement) to advocate for policies on a local and national level that regulate the production of sugarcane to ensure the safety of the people who live nearby. Sugarcane has long been cultivated in El Salvador, and experienced farmers know it is possible to safely produce sugarcane without the use of these harsh chemicals.

US-El Salvador Sister Cities stands in solidarity with CRIPDES struggle around this issue, supporting their local campaigns to respect the local ordinance, promoting further investigation and research to inform their work and sharing with others the role that free-trade agreements with the US and China play on this issue.